Now that spring is here with warmer weather, our long overdue “do to” list is underway. You know the usual stuff, raking the mountains dead leaves that have wintered in every nook and cranny around the house, getting the gardens ready for tomatoes, peppers and this year potatoes. Another item on our “to do” list is to stain the outside window trim. The trim has been looking especially shabby and weathered, so I decided to go with a darker stain around the windows for be a fresh new look. New stain meant a trip to the home improvement store and shopping for the perfect color, one of my favorite things to do and one that makes Mitch crazy. As I was perusing the colors trying to decide which one would be the right choice, Mitch stood there looking like he’d just passed a kidney stone.

I wasn’t sure how much we would need, so just to be on the safe side I bought four gallons. We have twenty three windows of which six require an extension ladder to be used to get to; the rest can be done with just a six foot stepladder. I am not fond of heights; in fact one could say I am almost terrified of heights. The height is not the real fear it’s the fear of falling off the ladder that is the scariest part of climbing a ladder. I started with the easiest windows first leaving hardest for last. Climbing up the step ladder, reaching what I could, repositioning the ladder and repeating the process went very well for the back side of the house. I moved around to the kitchen side of the house and kept up the momentum of the morning, everything going very well, too well I should have known.

I had just finished staining the trim around the kitchen door and carried the can of stain, paintbrush and the hand broom I used to whisk away spider webs around to the front of the house. I came back, grabbed the stepladder, closed it for easier carrying and stepped off of the porch to carry the stepladder down the hill and around to the front of the house. I’m not sure what exactly happened, but the next thing I remember was taking a header off the porch and doing a somersault across the yard with the ladder. I sat up looked at my right arm which had a big chunk of flesh gone and was bleeding. The right leg of my jeans was ripped and my shin had a two inch long scrape down it. It didn’t take very long for the bruises to show up, they formed quite quickly in fact. There are three dark ones on my forearm and a really spectacular six inch bruise on my shin. I thought that the most dangerous part would be climbing up eighteen feet or so on the extension ladder and leaning out to reach as far as I could to stain the trim on the front of the house. I had no idea just carrying the stepladder would be my downfall.

Mitch has dubbed me “Dances with Ladders”.

The dogs and I went for a short walk and found some signs that Spring is finally here. 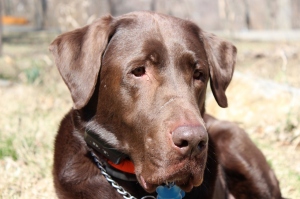 Orso enjoying lounging in the sun 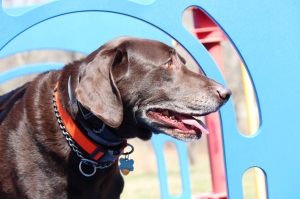 Charlie likes the playground equipment too 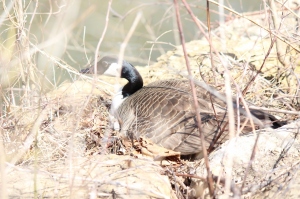 We found a goose setting on a nest 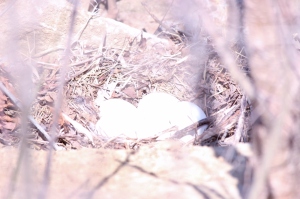 We found another nest sans Mom 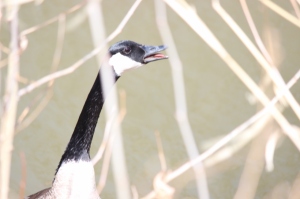 Then Mom showed up to let me know not to come too close. 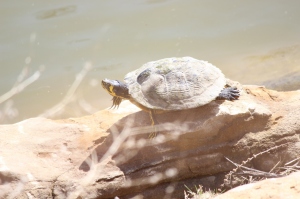 We even found a turtle sunning himself

Photos taken with my Canon Rebel

There is a house in our little burg that is unloved and forgotten. No one lives there anymore. I imagine that at one time it was filled with laughter and people coming and going. Today it sits vacant with tree limbs lying on the roof and seedlings have sprouted in the gutters. The weeds growing on the roof are healthier than the ones in my yard. How weeds can grow on an asphalt shingle roof is beyond me, I have places in our yard that weeds won’t even grow. A giant tree has fallen over and lies across the ground. To call it rundown and shabby is an understatement. The roof is sagging in spots giving it a rippled look. Every day when I drive by the house, I am surprised that it still stands.

There is a padlock on the front door, I assume to keep people out, but surprisingly enough there is an open window on the side of the house that has been open for a year now, through the summer and winter last year. I can only imagine what creatures have made it their home seeking refuge from the cold and snow over the past winter. It’s probably pretty cozy for squirrels and raccoons dry and out of the wind. I don’t think I want to go in and find out who or what has taken up residence. I’m not that brave.

The house reminds me of a series on cable a few years ago about what the earth would look like if the entire human race was gone and how Mother Nature reclaims her world bit by bit. When it starts getting warm again and everything is greening up and growing, the house may become totally overgrown with vines. It is truly a very sad portrait of our society that we create something live in it then cast it aside without a care. I’ve never been in the house, but I think that had someone still loved the house and cared for it, then the house would not have gotten to this state.

There is a story that the owner found his true love and moved to a warmer climate, or perhaps the house is haunted and the ghosts of the long ago past haunted the house forcing the man to flee afraid to go back in the house. The fact that the house still stands after such a long time of vacancy helps to fuel the haunted thoughts of a creative mind. Besides I would rather believe the house is haunted than the boring truth that it is just unloved. 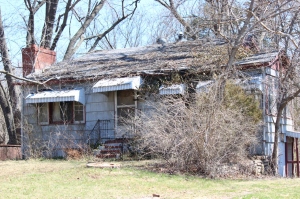 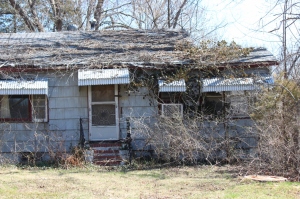 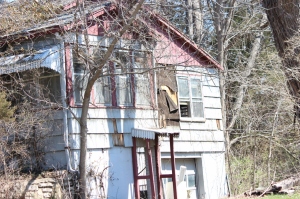 What do you think, is the house haunted or just unloved?