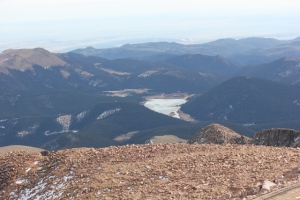 It’s a long way down

Tight turns up and down 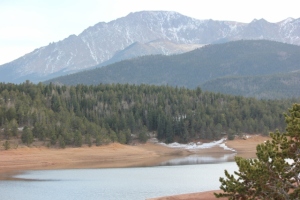 We just got back from a long weekend trip to Castle Rock, Colorado to see my best friend in the whole world.  Castle Rock is located on the eastern side of the Rocky Mountains about 2 hours or so from the foothills.  It has been decades since either Mitch or I have been to Colorado.  So we went sightseeing to some of the areas attractions.  On a whim the four of us decided to drive up to the top of Pike’s Peak.  My parents had taken me up when I was a child but I had forgotten anything about it other than going.

Pike’s Peak has an elevation of 14,110 feet above sea level, 31st highest peak out of 54 so it’s no slouch.  For some reason though, I didn’t think that 14,110 feet was so high, I don’t know, maybe I was suffering altitude sickness or just that impoverished model of reality that I live in.  Because for someone that is not a fan of heights I thought that driving up a winding narrow two lane road in thin air sounded like a great idea.  The ride started off nicely with great vistas of the mountains in the background and dramatic cliffs climbing all the way up to heaven.

We hadn’t even gotten half way up when one side of the road was a huge drop off with no shoulder.  The side of the road just ended and there was nothing but space.   I was terrified to look out the window and over the drop off for fear that the mere force of my body weight angled toward the car window would cause us to veer off the side and plummet down to our deaths.  Consequently I found myself leaning over toward my friend trying to will the car’s weight and balance toward the middle of the road.  Yes I know a truly rational thought.

When we finally reached the top of Pike’s Peak and got out of the car the second thing that totally surprised me was how cold it was.  Yes I know, we just drove vertically 14,110 feet and the air should be colder, but at the base the air temperature was 68 degrees why was it now 28 degrees and I was not dressed for 28 degrees.  Plus I was shocked at how little air there was to breathe and I was sucking in as much I could get, but there wasn’t much to go around.

Once I finally decided to quit being such a baby I marveled at the height we were at.  We were two thousand feet above the tree line with only tundra and rocks scattered around.  The view was magnificent, which as a matter of fact, was what inspired the song, America the Beautiful.  After warming up in the visitors’ center, we loaded up and headed off back down the mountain.  Lucky me we are going to be hurtling out of control down the mountain at break neck speeds around fifteen miles an hour or so.  Woo hoo.