We have three dogs.  AJ, The Good Dog, Charlie, The Green-Eyed Monster, and Orso, The Drool Machine.  AJ, The Good Dog, a seventy pound Labrador, is sweet and loving, soft and gentle and totally devoted to me.  Most of the time he has a serious expression on his face, but when the mood strikes him, The Good Dog is full of the Devil.  I’ve seen him put Olympic style wrestling moves on a ninety five pound Doberman and take him to the ground, laying on top of Rocky just chewing on his neck.  Now at eleven years old, the moments of the Devil are fewer and farther between, but it’s still there when needed. 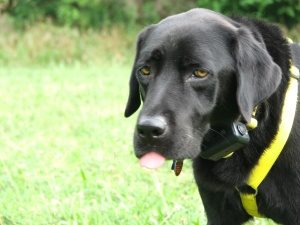 We got Charlie, The Green-Eyed Monster, when he was ten weeks old.  AJ acted like a proud papa watching over him and playing with him as Charlie grew up.  It was pretty amazing watching AJ play to Charlie’s level, never too hard, only as hard as the puppy could handle.  As Charlie grew the play got rougher, teaching him how to handle himself.  Charlie is a sixty five pound half German Shorthair half Labrador and total psycho dog.  Even though he  was almost raised by AJ, he will get extremely jealous of the attention we give AJ or Orso.  At seven years old, he will still look at you with an expression that says, “I’m the baby!  Don’t play with him, touch me.” 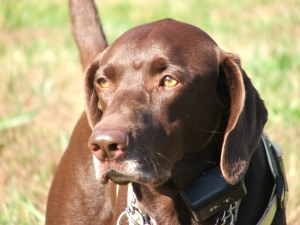 I didn’t want Orso, The Drool Machine, didn’t want to even go look at him.  A coworker of Mitch’s has a son that had a nine month old Chocolate Lab who needed to get rid of him.  I kept telling Mitch two dogs was enough.  The was no tension, both dogs got along, nothing was getting destroyed, life was good.  But Mitch said, “Let’s just go take a look see.  We don’t have to bring him home.”  What a crock.  Mitch knows me well enough to know that if I see him, we’ll be bringing him home.  So long story short, we came home with a ninety five pound puppy.  At five years old, The Drool Machine has wormed his way into our hearts, so he is here to stay.

One thought on “My Three Dogs”