While most everyone else was either fighting the crowds at the malls or surfing the web for bargains, I decided to spend my Black Friday a bit differently.  Mitch opted to work overtime, to pay for the new alternator the dog hauler just had to have after I spent a small fortune at the grocery store.  Had I known the alternator was going to go out, I would have waited to buy some of the extras.  Sorry I digress, (a sign of old age).  I thought that since I was on my own for Black Friday and crowds of strangers, each ruder than the next, are not my idea of fun, I took the dogs hiking.  They didn’t care where we went as long as they were with me, so it was a win-win situation.

So I loaded them up and headed off for a morning of tearing around out in the woods at break neck speeds.  For three dogs that normally spend their days looking like large lumps on the bed, laying around sucking up oxygen and conserving energy, it’s a whole different story when we take them out to the woods, they turn into three energizer bunnies, going and going and going.  I parked the car at the top of the hill with about a half mile hike to the bottom where the trail starts.  Which means the way back to the car is at the TOP of the hill, about a half mile hike UPHILL to the car.  As soon as the dogs figured out where we were, they couldn’t wait to get out and run around.  Orso started barking and pacing back and worth, because I wasn’t moving fast enough for him.  I opened the tailgate and out came the three happiest dogs.  The only thing that could make their day any better would be if there was peanut butter cake there too. 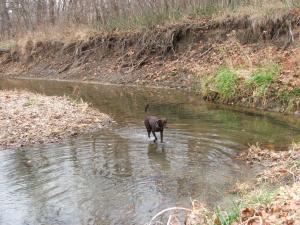 The day was chilly with gusty winds and clouds covering the sky, not the prettiest day but definitely not the worst.  We were the only ones around so the dogs could run and sniff to their hearts content.  After the hike I gave each one a bath so now I have pretty dogs – Bonus!   I can’t think of a better way to work off turkey and all the fixins.

2 thoughts on “My Black Friday”