The chase is on 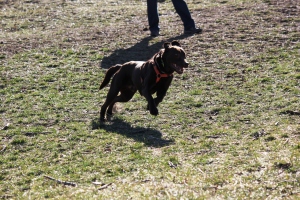 Charlie came through the dental cleaning with flying colors.  No cavities, just one cracked tooth, but our vet said it still looked healthy so he left it in.  He came out to greet me with a total lack of manners.  He jumped up on the counter pretty clumsily, still suffering from the effects of the anesthesia.  Charlie looked a little loopy, his eyes drooped slightly, but he was happy to see me, all was forgiven.

I went to pick him up on my way home from work, so I was driving my car, a Pontiac Firebird, which normally none of the dogs get to ride in.  Besides no room for a dog, I like driving in a car with no dog hair swirling around my face, or leaving a dog hair contrail when I drive with the top down.  I put Charlie in the car hoping he’d climb in the back and lay down.  No, he wanted to hang out in my lap.  I had to remind him that he was a sixty five pound dog, not a yorkie.

We got home just in time for dinner.  Charlie rushed into the kitchen and drank water like he’d been lost in the desert for a week.  Poor baby.  As I dragged out the dog food buckets and dog bowls, Charlie looked at me with a skeptical look, wondering if he was really going to get fed or if I was just torturing him.  He ate with gusto, as always.

At bedtime, Charlie climbed into his round bed, snuggled down and slept like a rock all night.  All is right with the world, again.

Charlie is not happy with us this morning.  He didn’t get his breakfast this morning.  No carrots as treats, no fruit after our breakfast and no water.  No, we’ve not decided to save money by rotating starving a different dog each day.  Even though it may come to that if gas prices keep going up.  No, Charlie has an appointment with the vet to get his teeth cleaned this morning, so it was no food or water after midnight for Charlie.

Which sucks for us, because even though we know why he can’t have anything while the other two get to dine sumptuously on Science Diet dog food, all the water they want and the exotic carrots they devour as treats, try explaining that to a dog.  All Charlie understands is that while AJ and Orso were eating breakfast this morning, he was locked up in the bathroom with Mitch.  Some consolation prize for a hungry dog.  I could hear the angry yelps all the way from the other side of the house behind the closed doors.

The look on his face after coming back from our walk was scary when no carrots were handed out to any of the dogs.  The other two kept looking at each other then at me wondering what was up too.  But I figured it would be truly cruel to pass out treats to two and not Charlie.  It was a challenge putting the water bucket down on the floor for AJ and standing guard, hovering over the water bowl until he was finished so Charlie wouldn’t try to drink any.  After watching with a hurt look on his face, Charlie finally left the kitchen and lay down in the dining room, waiting to be forgiven for whatever he did wrong and finally get to eat.

After our breakfast was over and no one got any pineapple chunks as is the usual custom, we have labs and they eat anything, remember, Charlie gave me one last hurt look of self pity and stomped off to the bedroom.  There he curled up into a tight little ball and refused to lift his head to look at me when I tried to pet him and explain once again why he couldn’t have anything to eat or drink.  I know he doesn’t understand me or care, all he knows is that I won’t feed him.  So of course now I feel terribly guilty even though as a human being with opposable thumbs, I know that what we’re doing is the best for him.  It doesn’t help though does it?

When I left to go to work, Charlie still refused to look at me, curled in that tight ball.  I had no idea that dogs pout.  Who knew?

That’s all it takes.  One look from Orso with his head lowered and it’s GAME ON!  AJ, our eleven year old lab accepts the challenge with loads of exuberance, causing Orso, our five year old lab to reply in kind.  This sets off a charge toward each other from opposite corners of the room and at the last moment just as the two would crash into each other, both raise up on their back legs and slam into each other with a forceful chest bump.  Then they hit the floor chewing and barking at each other.  AJ will then lunge at Orso, who for some reason will back up around to the hallway or stand in the bedroom doorway and bark at AJ.

AJ will then pretend to charge, stop short of actually connecting with Orso, then back up and bark back at Orso.  Orso will lunge back and pretend to come out of the bedroom but doesn’t.  The coward.  All the while this is going on between those two, Charlie will stand at my side and bark at me, just to let me know that AJ and Orso were behaving badly and that he had nothing to do with it.  If I don’t react and make them stop on a timely basis for Charlie, he will then join the fray, taking it out on Orso.  This causes a mass Orso attack, hair up barking, snarling and chewing.  No blood is drawn just wet slobbery necks and legs.

Orso will escape run towards the bedroom and leap onto the bed from the doorway with Charlie in hot pursuit.  One of these days, one or both of the dogs is going to crash through the bedroom window.  On that day, we’ll have dog stew for dinner.

Today is just not my day.  I didn’t sleep well, even though I took a sleeping pill last night.  Maybe having a seventy nine poundLabradorlying across my legs all night had something to do with my lack of sleep.  Consequently I didn’t even make the effort to get up and walk on the treadmill.  Sometime between last night after yoga class and this morning I lost one of my rings.  I didn’t notice it until I took my rings off to put on lotion this morning.  Talk about being aware of my surroundings.

Since I spent the morning scouring the house, my gloves and the dogs’ mouths for any trace of the missing ring, I was running a little late to work.  That was when I noticed that I was almost out of gas.  That necessitated a trip to the gas station, woohoo.  There goes another thirty dollars and I get to smell like gas all day.  What a waste of the Calvin Klein, Euphoria I dearly love.

I get to work, turn on my computer and attempt to change my voicemail recording, but kept getting an automated response saying I was entering the wrong access code.  I thought “what the..”.  That was when I noticed that the extension on the display was not mine.  My first thought was that some jackass was playing a practical joke and had switched phones.  Not funny.  I spent five minutes looking through the extension list looking for the person whose extension I had.  I found it under “W”, of course it would be “W”.  To make matters worse, it was a person who worked the parts call center.  That means my phone would ring nonstop from customers wanting to order something that I would have no idea what they were asking for or how to get it to them.  I had no idea who had my phone or if they were calling 900 numbers on my extension, oh joy.  I could hear HR calling me to the office.  And it’s not even 7am.

I think I should just throw in the towel, go home and crawl back under the covers and the seventy nine pound lab.

A washing machine has mysteriously appeared in front on our little burg’s City Hall.  It showed up last week and so far no one has come to claim it.  I have to ask myself if there was some ulterior motive behind the washing machine’s sudden appearance.  Is someone trying to make a point?  Does the City need to clean its dirty laundry?  Does the City have dirty laundry?  We live in a teeny tiny city with a population of about 250, only about 122 homes.  So how much dirty laundry can we have?

The front entrance to the parking lot at City Hall is well lit with one of those horrendously bright mercury vapor lights, so I would think that the person or persons dropping off said washing machine were well illuminated and therefore either very gutsy or complete idiots.  Or maybe they were wearing cloaking devices that shielded their identities.  I wouldn’t have the nerve or the stupidity to discard an appliance in front of a city municipality structure.  I guess my parents beat the fear of consequences too well into my hardhead growing up.  Maybe that’s the problem today, minimal or no consequences for our actions.  Sorry I almost climbed up on my soapbox.

Anyway back to the speculation about the wayward washing machine.  Could it have run away from home, tired of all the dirty clothes it had been forced day in and day out to clean; now choosing to live a life on the mean streets of our humble little burg?  Maybe it’s just waiting for the bus, even though no bus ever comes to our fair town (not counting the school bus).  Maybe the previous owners are just getting a jump on our annual City Cleanup day.  The only problem with that theory is that one of the rules of the City Cleanup is no appliances.

Maybe I should take pictures of the washing machine and post around the city and surrounding areas to see if anyone has lost the machine and is looking for it.  Wouldn’t that be a happy ending?

Squaring off getting ready to rumble 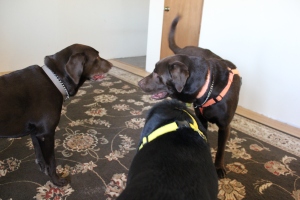 When it’s too cold to go outside to wrestle. 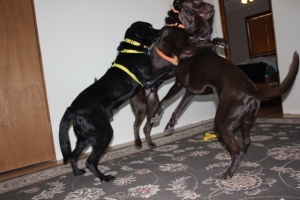 I don’t get it.  Right now I’m so mad and frustrated I’m not even sure how to write what I want to say.  I just heard on the news that there is a bill in Missouri to make it legal to shoot mountain lions.  Just because.  Now granted I haven’t read the entire bill, but there is already a law making it only legal to kill a mountain lion if it is threatening you or your livestock.  I don’t need a law for that.  Common sense says that if something, man or animal, is threatening me or my family (dogs included), I have no qualms about killing the threat.  But to just kill something for giggles and grins is totally repugnant to me.

Why do we do this?  We build and destroy the habitat of wildlife and are then outraged when the deer eat our hostas, the raccoons tear up our trash and there are mountain lions walking through our backyard.    Why are we so myopic that the world is all about us?  I’m not a total tree hugger, but my god when do we stop and start being the caretakers and good stewards of this world?

Okay, I’ll come down off my soapbox, but I’m still pissed as hell.  I just don’t get it.