This is what our remodel has been reduced to. Because of previous battles and total opposite styles in taste and décor, our never-ending long suffering remodel of this money pit called our home, Mitch is now consulting my opinion on even the minutest detail. Believe me when I say that when we first started this arduous journey, I didn’t think our marriage would survive. We argued constantly about everything. The biggest stumbling block to our relationship was the master bath. We totally gutted it down to the studs and started over from there. The only fixture that stayed in its original spot was the toilet. And that was only because of the difficulty in moving the drain. We, meaning Mitch doing the labor and me being the creative genius, have moved from room to room bringing this hodge podge house into some kind of homey updated house.

Now we are down to the last two bedrooms, laying bamboo floors and rebuilding the closets. We fought over the placement of the closets and we removed them because of poor original construction. People back then used whatever material was available and no building code was followed. I finally gave in to Mitch’s idea of dividing the one closet into two with a wall separating them and with doors opening into each room. Mitch had a genius idea of making them cedar closets which for those rooms is very practical as well as a unique idea. Those rooms are on the old side of the house, which was originally built in 1928 and added on to in 1934, which means that side of the house is not as tightly constructed leaving room for mustiness and the possibility of mold. So the cedar closet was a stroke of genius. The only thing left to argue about was what type of door to install for each closet, bi-fold or sliding, solid or louvered. Louvered bi-fold won (my idea). I bought wooden knobs thinking simple easy plain, no fuss, no muss. It wasn’t until Mitch opened the doors up to remove the hardware and prepare to be stained, that he found that each door had its own wooden knobs.

When it came down to the stain, that was another dilemma, the knotty pine planks are all eighty years old and I’m pretty sure that the stain used back then is long gone, even if we knew what the color was. Mitch went on the hunt buying about a dozen small cans of stain to try and come as close as possible to the original color. A friend suggested that we go to Sherwin Williams with a piece of one of the existing boards and have them create a matching color. Mitch stained the doors, the knobs (all four of them) and the trim. When it came down to putting the knobs on the closet doors, he called me in the make a decision, which knob did I want on the doors. I looked at the knobs and laughed out loud, they were so similar. The only difference was a slight rounded top on one and a flat top on the other. I asked if he was serious and said that he could pick, to which he said no way, I had to pick.

Which one do you think I should pick, you know they are so very different. 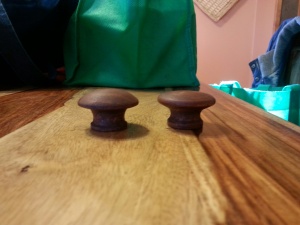 22 thoughts on “Down to the Nitty Picky”