On April 16, 2011, the first day of our vacation, we started the most labor intensive remodel of our master bath and on January 14, 2012, we are finally finished.  It only took two days shy of nine months to gut and totally revamp the eight foot by ten foot room.  I had this improvished model of reality that the remodel from start to finish would only take one maybe two weeks.  I had no idea what taking out the bathtub, the vanity and removing one closet would entail.  By some sheer miracle of faith, we are still married (to each other!).  There were times I didn’t think the room would ever finish or that our marriage would survive.  The only thing left to do is hang some decorative pictures, even though Mitch looks completely baffled when I mention that, as to why anyone would hang something other than a robe or a towel in a bathroom.  This has been the crux of our differences. 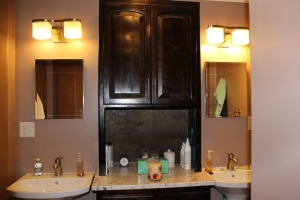 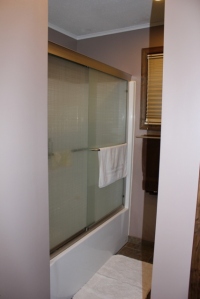 But I must say that the bathroom looks awesome.  Much better than it did, with the ugliest vanity on the face of the planet.  No more is there a faux wood grain counter top.  Gone is the chipping porcelain sink.  The two pedestal sinks look so clean and contemporary.  Banished is the cramped, closed in space.  The custom cabinets made by Smithville Custom Cabinets look rich and warm, giving us ample storage.  The outdated hanging lights attached to the ceiling are gone and recessed lighting floods the room.  The tile floor looks so much better than the old linoleum and using the same porcelain tile as a baseboard was a stroke of genius, if I do say so myself.  It really does look very nice, though Mitch says was too labor intensive compared to regular wood baseboard. 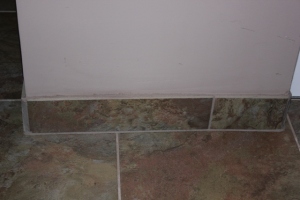 I took pictures of before, during and after, but you have to actually stand in the room to fully appreciate how hard Mitch worked and what an accomplishment he made.  I kept a spreadsheet of all the money spent on the remodel and we completed the project in at just under five thousand dollars.  Mitch did all of the work himself, with the occasional help from a few friends.  Otherwise the cost would have been much higher.